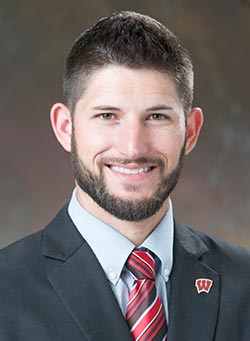 A former All–Big Ten Track and Field student–athlete and 2012 Wisconsin graduate from Nashotah, WI, Derek Steinbach serves Wisconsin Athletics and the Wisconsin Foundation and Alumni Association as the Managing Senior Director of Development. In this position, his primary focus is to provide services to current and prospective donors to secure significant donations in the support of the athletic department’s capital projects, including facility campaigns and student–athlete scholarship funding. In addition to fundraising, he served the W Club as a member of the Advisory Board from 2016–2019 and continues his service to UW–Madison as a Hearing Committee member for the Office of Student Conduct and Community Standards.

Prior to returning to Wisconsin Athletics, Derek spent four years working for the University of Missouri (Mizzou) in the Athletics Department during its transition to the Southeastern Conference. At Mizzou, he co–managed the annual fundraising operations while also contributing to the development of a $45 million premium seating renovation to Memorial Stadium.

Derek is married to former Wisconsin Volleyball standout Alexis (Mitchell) Steinbach ('13). He is the son of Geoff and Stephanie Steinbach and the brother of Brady Steinbach, a UW graduate and former member of the Wisconsin Rowing team.