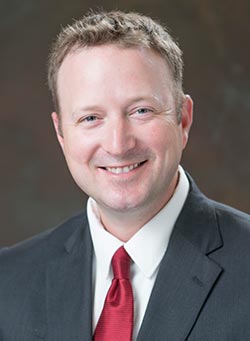 Chad Kimmel was named Assistant Athletic Director for Development in 2014 after eight years with the UW Development office. In his role he serves as the head of the Wisconsin Athletic Development Office, leading a talented staff of development professionals and overseeing annual giving, major gifts, scholarship endowments, premium seating and fund raising initiatives for capital projects.

During his tenure at Wisconsin, Kimmel has been a valued member of the development team responsible for securing over $75 million for capital projects, $30 million in endowed scholarship funding, and growing the annual fund from $8 million to over $14 million.

Kimmel is an active member in the National Athletic Directors of Development (NAADD) professional organization, an affiliate of the National Association of Collegiate Directors of Athletics (NACDA), and has participated as a presenter at their annual conference.

Kimmel earned a bachelor’s of science degree from Austin Peay in 2002. He continued his education at Kansas State University earning a master’s degree in college student personnel in 2004 and participated in the Ph.D. program in higher education administration–student affairs.

Kimmel and his wife, Casey, have four children: Kennedy, Will, Kate, and Lou.